Media Received for Heir to the Crown Series

​July 2019: Mercerian Tales: The Call of Mgic Reviewed by The London Review and Elgin Life

May 2019: Fate of the Crown Reviewed by The London Review and Elgin Life

January 2019: Shadow of the Crown Reviewed by The London Review and Elgin Life

October 2018: Heart of the Crown reviewed by Elgin Life 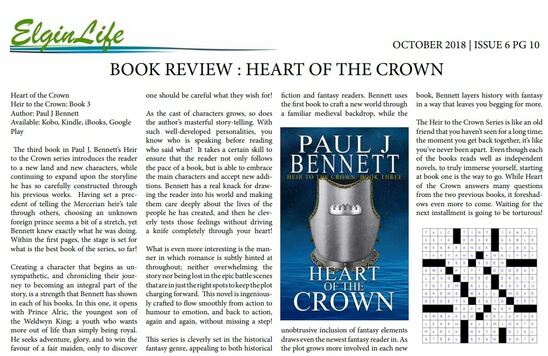 ​The third book in Paul J. Bennett's Heir to the Crown series introduces the reader to a new land and new characters, while continuing to expand upon the storyline he has so carefully constructed through his previous works.  Having set a precedent of telling the Mercerian heir's tale through others, choosing an unknown foreign prince seems a bit of a stretch, yet Bennett knew exactly what he was doing. Within the first pages, the stage is set for what is the best book of the series, so far!

Creating a character that begins as unsympathetic, and chronicling their journey to becoming an integral part of the story, is a strength that Bennett has shown in each of his books. In this one, it opens with Prince Alric, the youngest son of the Weldwyn King; a youth who wants more out of life than simply being royal. He seeks adventure, glory, and to win the favour of a fair maiden, only to discover one should be careful what they wish for!

As the cast of characters grows, so does the author's masterful story-telling. With such well-developed personalities, you know who is speaking before reading who said what!  It takes a certain skill to ensure that the reader not only follows the pace of a book, but is able to embrace the main characters and accept new additions. Bennett has a real knack for drawing the reader into his world and making them care deeply about the lives of the people he has created, and then he cleverly tests those feelings without driving a knife completely through your heart!

What is even more interesting is the manner in which romance is subtly hinted at throughout; neither overwhelming the story nor being lost in the epic battle scenes that are in just the right spots to keep the plot charging forward.  This novel is ingeniously crafted to flow smoothly from action to humour to emotion, and back to action, again and again, without missing a step!

This series is cleverly set in the historical fantasy genre, appealing to both historical fiction and fantasy readers. Bennett uses the first book to craft a new world through a familiar medieval backdrop, while the unobtrusive inclusion of fantasy elements draws even the newest fantasy reader in. As the plot grows more involved in each new book, Bennett layers history with fantasy in a way that leaves you begging for more.

The Heir to the Crown Series is like an old friend that you haven't seen for a long time; the moment you get back together, it's like you've never been apart.  Even though each of the books reads well as independent novels, to truly immerse yourself, starting at book one is the way to go. While Heart of the Crown answers many questions from the two previous books, it foreshadows even more to come. Waiting for the next installment is going to be torturous!

April 2018: Sword of the Crown reviewed by The London Review

​'Sword of the Crown' is the second book in local author Paul J. Bennett's 'Heir to the Crown' Series. The first installment of this medieval fantasy ended in quite a cliff-hanger, and so the expectation was that this new tale would continue from that point, moving the plot forward immediately. Bennett has instead chosen a rather unique way to set the stage for his second book. As was previously experienced, he bases his novels on one of the major influencers of the heir to the crown, and lets the tale unfold through their eyes. Although he continues with this approach, he has successfully taken it to a whole new level in his newest release.

Right from the first chapter, he draws the reader in, enticing them with the richly detailed origins of Dame Beverly Fitzwilliam. Her life unfolds in the pages of the book through a theme of overcoming odds and persevering in the face of adversity. In the author's notes, Bennett speaks to what women of the present day face, and how he used similar obstacles to build a convincing background for his main character. It is interesting to note that being a female knight in a patriarchal society affects Beverly's life every day, yet the tale is so much more than this struggle alone.

Unlike Gerald in the first book, Beverly is a hero, or at least strives to be a hero in everything she does, but like any real person, her moments of grandeur are tempered by the occasional flashes of self-doubt. This ability to create believable and relatable characters is one of Bennett's greatest assets, along with the creation of a well-developed world that has the backdrop of history layered into a fantasy location. This well thought out setting invites the reader to immerse themselves in these familiar surroundings, while at the same time, the unexpected plot twists entice them to keep the pages turning.

What is noteworthy about this series so far is the ability for each book to stand on its own merits, while the overarching theme of good versus evil plays in the background. Bennett does an excellent job of ensuring the secondary characters are introduced in both books, allowing the reader to start with either book, but those that read this book first will definitely want to grab the series starter next.

Bennett's writing style is like a fine wine; it is getting better with time. His first work was a good read, while 'Sword of the Crown' shows a refinement of his craft, as he obviously grows more confident in his writing endeavours. He has come into his own in this book, and the future looks very bright for this author. The series is unfolding like a huge tapestry that will tell a grander tale when all the pieces are combined. The only downside is the time the reader has to wait until book three is released in the summer.

November 2017: Servant of the Crown reviewed by The London Review

​‘Servant of the Crown’ is the first book by a new Canadian author, Paul J Bennett. According to his author notes at the end of the book, this is the first in a series called ‘Heir to the Crown’. Overall, the book moves along at good pace, interjecting both humour and emotion to draw the reader into its fantasy setting. It is easy to follow the plot and characters in their development as the book uses a familiar medieval setting interlaced into a new world. Through an interesting descriptive writing style, the world unfolds, giving the reader time to understand the differences between a past earth and this new land of Mercia.

The novel has multiple themes intermingled to create a compelling story arc. It begins with a military scene that sets the tone of strife for the common man, in a land ruled over by a tyrannical King. Even with evil reigning, the setting of the main story reveals humanities kindnesses through everyday occurrences and interactions. When you meet more of the characters, there is the feeling of a coming of age thread, but it does not overpower the storytelling and remains as a background theme.

With a new world, some authors tend to spend pages describing things, reminiscent of the opening scene in ‘Star Trek: The Motion Picture’. Bennett uses descriptions sparingly, allowing the reader to use their imagination.  It is noticeably bare of detailed descriptions of the main characters, making it very inclusive and open to interpretation.  However, the realistic well-detailed fight scenes can be quite gritty at times, but that is what makes it a compelling read.

The main character seems to be the unluckiest hero, yet at the same time, his relationships with those around him inspire him to achieve so much despite his past tragedies. He is a common man who makes mistakes and realizes that those mistakes at times have very undesirable effects. He even talks about this immediately after losing his temper, foreshadowing future strife in the book. His interactions with those around him reveal his character slowly, in a natural way, instead of just being told what his quirks are.

The author does an excellent job of surprising the reader numerous times throughout the book, making this a difficult review to both share the excitement of the tale while ensuring there are no spoilers. The plot itself is unlike others, but it has elements reminiscent of these authors: Mercedes Lackey, Katherine Kurtz, Robin Hobb, Frank Herbert, and Terry Brooks.

​If you are looking for a new series that will keep you enthralled and waiting impatiently for the next book to be released, then ‘Servant of the Crown’ should be added to your reading list! For those who like the extra addendum's and appendixes at the end of a book, there is a website with copious amounts of notes about the religion, magic, nobility and military structure along with a list of release dates for future tomes in the World of Mercia.